Speaking of baseball (I was, this morning), next Tuesday, August 26 is Komen for the Cure night at Louisville Slugger Field. Come see our playoffs-bound Bats in action and help support the cause. Pink mini-bats will be on sale for $10, with all proceeds going to the Susan G. Komen Foundation.
This Lou will be there with her Young Survior sisters. I'll be the one in the pink shirt! ;)
Posted by M at 2:42 PM No comments: Links to this post

Loueyville About to Be A Little Less Weird

Speaking of local celebrities, a source in the know told Lou that "the pink and black attack," Louisville's own "dating Goth" celebrities, Kynt and Vyxsin, have packed their patent leather bags for a move to LA. (In fact, their MySpace page lists LA as home.)
"There are only so many gay pride events in Louisville," says the source. "Every time they travel, they're booked solid for events."
Kynt and Vyxsin have parlayed their Amazing Race fame into appearences on two of Rosie's family cruises, modeling gigs for Hot Topics stores, and a profile in this month's Gothic Beauty magazine.
Also, it's "their" episode of Amazing Race that's been nominated for six emmys this year. (The episode, titled "Honestly, They Have Witch Powers or Something" is the one where they're elminated in India).
I'm sorry to see them go. I never met them, but I liked having them around. Unlike Tracee Dore, who seems to have dropped off the face of the earth-- a google search yielding articles in local newspapers all lead to dead ends-- Kynt and Vyxsin did their hometown superproud.
(Gasp! While digging around for stuff on Dore, I discovered oodles online that Mikey V., the cop from Miami, was suspended from the Miami PD over allegations that he appeared in a gay bondage adult film called Rope Rituals, 1996!! And that he's not only gay but very out and for some oddball reason HGTV sat on that fact, despite being so very gay friendly. Weird.)
Posted by M at 1:12 PM No comments: Links to this post

Mapother in the CJ

Mama isn't big on celebrity crushes (although she has been secretly married to Bono since she was a teenager), but there's something about this William Mapother guy that makes her all googly inside.
Starting this week, Mapother stars in Actors' production of Glengarry Glen Ross, the first play of a packed season. According to his website, Mapother threw out the first pitch for a Bats game while Lou was cavorting around New England. That right there is a double-header of goodness in Lou's world-- Mapother + baseball = sigh.
Today's C-J features an article about the actor and the play. More of Lou's crush here and here.
Posted by M at 12:21 PM No comments: Links to this post 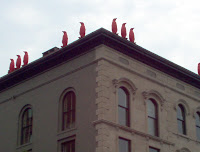 If you'd ever told this decade-and-a-half subscriber of The New Yorker that her favorite magazine would be replaced by one called Garden & Gun, she would have laughed her brown-thumbed, critter-lovin' ass off. But since its inaugural issue a little more than a year ago, this gorgeous magazine has offered some of the best writing and certainly the best photography and artwork on the magazine rack. From Roy Blunt Jr.'s regular column to features written by luminaries from Jimmy Buffet to Clyde Edgerton to Rick Bragg, Garden & Gun is worth reading from cover to cover; even the advertising smacks of stunning, classy taste.


This month's Garden & Gun arrived yesterday and the cover article led me to furious thumbing through the thick magazine: "Best of the New South: 50 People, Places, and Things We Love." (By the way, the cover model/musician is Miranda Lambert who is third billing-- seriously? third??-- on the closing act of the Kentucky State Fair. After reading the article about her, I could ALMOST pony up the $41 bucks to see her if it didn't mean also suffering through Trace Atkins and Keith Anderson.)


I couldn't be prouder that my favorite magazine chose to recognize one of my very favorite-est things about Loueyville; G&G's "Best Hotel" is our very own 21c.


Yes, I admit, my love affair with 21c began with the penguins. I'm a sucker for penguins. And on my very first trip to Loueyville, when I was interviewing for my current job, I first came across the curious penguins atop the building on Main Street and was smitten. Since then, 21c has been a regular stop for me whenever I happen to be in downtown.


I've had so many little "moments" courtesy of 21c. And when I say "courtesy of," I am stressing that these experiences are FREE. 21c's art is free and open to the public always. And that's the very best thing about the hotel/museum. Shortly after I moved, a cousin visited and we sat in the lobby and watched the moving sand-sculpture-installation-coffeetable for the better part of a half hour (and it was the middle of the day and there had not been any alcohol consumed at the time). Two dear friends stayed at 21c when they came to the Ville; Roommate and I passed a half an hour in their hotel room and opened the door to find one of the penguins standing guard at the door. I have spent an inordinate amount of time lingering by the elevators watching the boggling video installation of letters that rain down upon your reflection and settle upon your shoulders and hair (or in my case, lack thereof). I purposely make time to visit the loo, where the water runs off the edge of the infinity sink and where two-way mirrors wreak havoc on your sense of privacy.


In fact, I have a poster of the penguins in the hallway of my house and a throw pillow of the red penguin on my couch (those, of course, were not free). If there were a fan club, I'd have a membership card. I've promised myself that once I get through my chemotherapy and can truly enjoy an evening downtown, I will splurge and get a room at 21c to celebrate.


So congratulations to one of my favorite Loueyville places for earning an honor from my favorite periodical. It's a lovely match. While I have not yet drunk the Austin, TX Kool-aid (and admit it's been more than 15 years since I was last in Austin), it seems a good fit that 21c's plans to expand into that "It's in Texas, but it's not Texas" city (not to mention that Austin originated the whole "Keep ____ Weird" campaign that Louisville has so embraced).
Posted by M at 12:09 AM No comments: Links to this post

Today the New York Times published a recipe for a "Louisville Sling." I caught the mention on the 'Ville Voice this morning and figured I would send the recipe over to Roommate who is currently vacationing in Australia for a month and a half. Thought he might wanna introduce a little Louisville Love to the bartenders Down Under, a number of which I'm sure he already knows by name, personal history, and drink preference by now.

My poor brain sizzled as I read the recipe over and over, trying to figure out what was wrong with it. Surely I was overlooking the mention of a jigger of Maker's Mark or a couple of shots of Woodford, right? Had the Gray Lady issued a misprint?

No! In fact, the Louisville Sling is a non-alcoholic beverage. Well, sort of. While the recipe is billed as a "No-Alcohol Refresher," it does include bitters "for serving." Bitters, of course, being a(sometimes potently) alcoholic beverage. Precious.

Anyway, the absence of significant alcohol -- especially bourbon-- in the Louisville Sling indicates to me that the eponymous Louisville being slung is not our fair city, but rather Louisville, KS, population 209.
Posted by M at 10:06 AM No comments: Links to this post

From the "We Could Have Told You That" Department

According to today's CJ, WFPK will be named "Station of the Year" for the medium to small markets at the annual Radio and Records Triple A Summit in Boulder, CO.

I'll say it again, our public radio stations belong on anyone's top 20 reasons to love the Ville list.
Posted by M at 10:23 AM No comments: Links to this post

lou at loueyville.com
She'd love to hear from you!